This is a tube chassied Ghia owned by Parke Fishel. The car was originally built by Ron Santhuff, of Santhuff Machine & Engineering, and has a chromoly chassis with Santhuff struts and coilovers. Parke is having a pro-stock motor built by David Crow and will be racing the car in the TXPRA Pro-Stock class once it's done. Parke had me build an aluminum wing/engine cover, mount wheelie bars, install a parachute and mount, and make new aluminum doorpanels. Below is a "before" picture and some "after " pictures with brief descriptions. This car was completed on 5/24/98.

As it arrived at Big Wig Race Cars 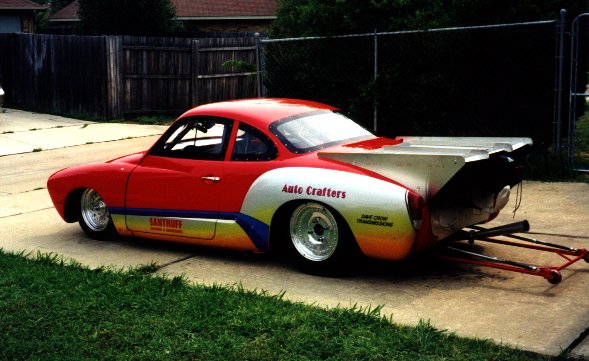 This is how the car looks now with the new wing, parachute, and wheelie bars. The wing is still bare aluminum but will be painted. 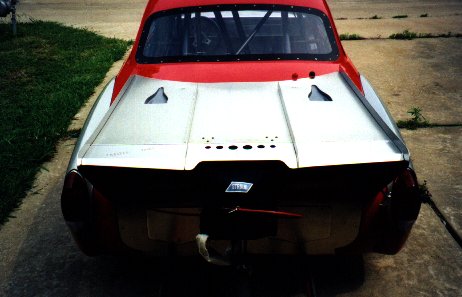 In the top of the wing you can see the NACA ducts that let some fresh air in for the carbs. The trailing edge of the wing is adjustable to increase downforce if desired, and the holes cut in the center rear of the wing is to let some air down onto the parachute to help it deploy faster. In the back panel behind the engine are two hinged doors that allow air to escape from that compartment during a run. 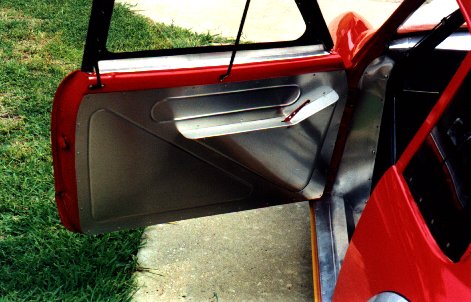 This is one of the new doorpanels I made for Parke's Ghia. Too cool! They're much nicer than what it had in it, I must say, and they feature an "arm rest" which is there just to add some style to what are typically flat panels in all the other race cars I've seen. All is constructed from .032 inch aluminum. In the arm rest is an anodized handle which releases the door latch. 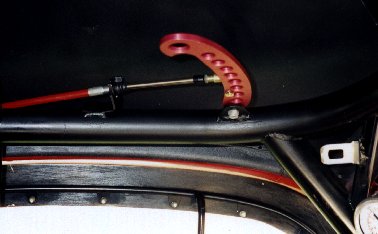 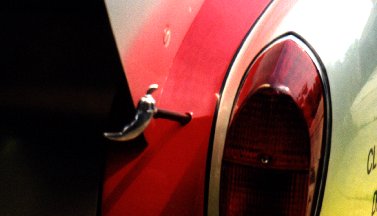 Above is the parachute release handle which is red anodized to match the door release handles. It is mounted just forward of the driver's head for easy access. Also above is a picture of the chili pepper master cut-off switch at the rear of the car. A switch is required by NHRA, so why not make one with a little Texas flare to it? David Crow's Pro-Stock Ghia, another car build by Big Wig Race Cars, also features a chili pepper push/pull cut-off switch, and there will be more to come.

Parke's Ghia is ready for the 1999 TxPRA season!  It's wearing new Bogart wheels and CNC rear brakes.  The Big Wig wing has been painted and the David Crow built Pro-Stock motor has been installed.
Looking good!